Syria has fallen apart. Major cities in Iraq have fallen to al-Qa’eda. Egypt may have stabilised slightly after a counter-coup. But Lebanon is starting once again to fragment. Beneath all these facts — beneath all the explosions, exhortations and blood — certain themes are emerging.

Some years ago, before the Arab ‘Spring’ ever sprung, I remember asking one top security official about the region. What, I wondered, was their single biggest fear? The answer was striking and precise: ‘That the region will clarify.’ That is a fear which now appears to be coming true.

The Middle East is not simply falling apart. It is taking a different shape, along very clear lines — far older ones than those the western powers rudely imposed on the region nearly a century ago. Across the whole continent those borders are in the process of cracking and breaking. But while that happens the region’s two most ambitious centres of power — the house of Saud and the Ayatollahs in Iran — find themselves fighting each other not just for influence but even, perhaps, for survival.

The way in which what is going on in the Middle East has become a religious war has long been obvious. Just take this radio exchange, caught at the ground level earlier this month, between two foreign fighters in Syria, the first from al-Qa’eda’s Islamic State in Iraq and Syria [ISIS], the second from the Free Syrian army [FSA]. ‘You apostate infidels,’ says the first. ‘We’ve declared you to be “apostates”, you heretics. You don’t know Allah or His Prophet, you creature. What kind of Islam do you follow?’ To which the FSA fighter responds, ‘Why did you come here? Go fight Israel, brother.’ Only to be told, ‘Fighting apostates like you people takes precedence over fighting the Jews and the Christians. All imams concur on that.’

The religious propulsion of many of the fighters who have flooded into Syria in the three years of its civil war — 400 or more from Britain alone — is beyond doubt. From the outset this has been a confrontation inflamed by religious sectarianism. In the first stages of the Syrian conflict the Shia militia of Hezbollah were sent by their masters in Iran to fight on the side of Iran’s ally Bashar al-Assad. But those of a different political and religious orientation made their own moves against this. Across Britain and Europe, not to mention the wider Middle East, many thousands of young men listened to the call of religious leaders like the Grand Mufti of Saudi Arabia, Abdul Aziz al-Asheik and Sheikh Yusuf al-Qaradawi, who last year declared that Hezbollah is in fact not the ‘army of God’, as its name almost suggests, but rather the ‘army of Satan.’ Sheikh Qaradawi declared that ‘every Muslim trained to fight and capable of doing that [must] make himself available’ for jihad in Syria. 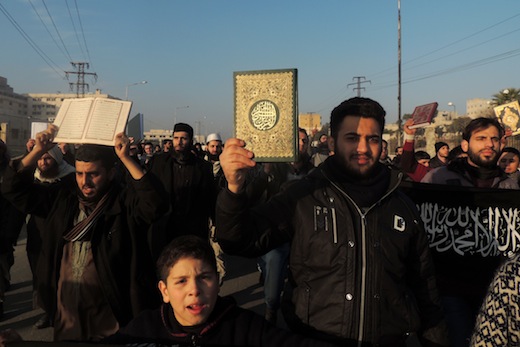 It is perhaps inevitable that with the amount of regional influence at stake, and the quantity of natural resources, there would be numerous powers involved in trying to dictate the Syrian endgame. But as the country’s civil war has ground on and the region as a whole has started to fall into a maelstrom, there is not a party or country that has not been shocked by one particular new reality. That is the fact that what has hitherto been the most important global player has decided to take a back seat. When two major Iraqi cities fell to al-Qa’eda forces last week, the American Secretary of State, John Kerry, expressed concern but stressed that for the Iraqi government this was now ‘their fight’.

One of the cities was Fallujah, the site of the bloodiest battle of the Iraq war, where 10,000 British and American troops fought to depose the Islamists. It is now back under jihadi control, with the black flag of al-Qa’eda proudly flying — and the West does not want to know. Although there are Syrian cities also now under al-Qa’eda control, the US and its allies remain unmoved over acting in that country either.

To an extent, what is happening in the Middle East is what happens when America and the West suddenly lose interest. But for the US, the reasons for that new lack of interest are obvious. With America soon predicted to attain energy independence, why should the country continue to involve itself deeply in a region which has cost it so much in blood, treasure and international reputation? Why should the US 5th Fleet continue to attempt to maintain regional security in a continent whose regional resources are increasingly rewarding nobody so much as the Communist Party of China?

For the UK and other lesser western powers, declining involvement in the region is neither a moral nor an interest-based decision. It is simply a decision based on the fact — as the last decade has proved — that we no longer have either the cash or the commitment to effect any decent outcome in the region.

If this remains a reality which is too rarely admitted here at home, it was long ago scented in the winds of the region. And as the new reality dawned, it was inevitable that the various factions in Syria’s civil war would reach out to anybody in the region who shared their broadest goals. Vice versa, the regional powers ended up looking for anybody who could plausibly assist them with the means and methods to reach their own ends. And so it is that a Middle Eastern proxy-war which had already reached as far as Washington DC has found its way right back to the very doorsteps of the countries that were propelling it. And how a war of religion also become a war of good old-fashioned statecraft. 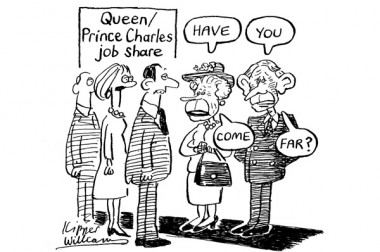 From the outset of the Syrian uprising, it was inevitable that Iran would weigh in on the side of its client in Damascus. Indeed, so desperate were the mullahs in Tehran to do everything they could to protect their own interests that they even put up with protests at home from people starved of basic supplies complaining about their own government pouring millions into Syria’s civil war.

But the next step was just as predictable. Saudi Arabia, which fears Iranian influence spreading any further than it has already throughout the region, began to back the opposition. Starting cautiously, in recent months that caution has retreated and Saudi is now supporting groups as close to al-Qa’eda-linked forces as to make little difference. Desperate measures, certainly. But for the Saudi leadership these are desperate times. Though it is a battle that has been brewing for decades.

There has always been the ongoing tension of Bahrain, which is under Saudi domination but which Iran seeks for itself. But then there is the quieter battle for influence in the Gulf states, which, while interventionist at times, quiver before the clashing of these bigger beasts. It was only as Syria fell apart and the regional powers were pulled inexorably into a more open battle, that the cold war between Iran and Saudi found its hot battleground.

There are those who think that the region as a whole may be starting to go through something similar to what Europe went through in the early 17th century during the Thirty Years’ War, when Protestant and Catholic states battled it out. This is a conflict which is not only bigger than al-Qa’eda and similar groups, but far bigger than any of us. It is one which will re-align not only the Middle East, but the religion of Islam.

There is a significant likelihood — as intra-Muslim sectarian tension has had fallout even in Britain and Europe — that this could be the case. Or perhaps the region is going to descend into a complex miasma of slaughter as surely as Europe did a century ago. Either way there will be a need for a Treaty of Westphalia-style solution — a redrawing of boundaries in a region where boundaries have been bursting for decades.

But for the time being, a distinct and timeless stand-off between two regional powers, with religious excuses and religiously affiliated proxies will in all probability remain the main driver of this conflict. Certainly the sides remain fundamentally irreconcilable. As one of Saudi Arabia’s most important figures, Prince Turki al-Faisal, said on a recent visit to London, ‘Saudi Arabia is the custodian of the Two Holy Mosques and the birthplace of Islam. As such, it is the eminent leader of the wider Muslim world. Iran portrays itself as the leader of not just the minority Shiite world, but of all Muslim revolutionaries interested in standing up to the West.’

Prince Turki decried Iran’s ‘meddling’ and its ‘destabilising efforts in the countries with Shia majorities — Iraq and Bahrain — as well as in those countries with significant minority Shia communities such as Kuwait, Lebanon and Yemen.’ As he said, ‘Saudi Arabia will oppose any and all of Iran’s actions in other countries, because it is Saudi Arabia’s position that Iran has no right to meddle in other nations’ internal affairs, especially those of Arab states.’

Saudi officials more recently called for the Iranian leadership to be summoned to the International Criminal Court in The Hague for war crimes. Then, just the month before last, as the P5+1 countries eased sanctions on Iran after arriving at an interim deal in Geneva, Saudi saw its greatest fear — a nuclear Iran — grow more likely. And in the immediate aftermath of the Geneva deal, Saudi sources darkly warned of the country now taking Iranian matters ‘into their own hands’. There are rumours that the Saudis would buy nuclear bombs ‘off the shelf’ from their friends in Pakistan if Iran ever reaches anything like the nuclear threshold. In that  case, this Westphalian solution could be prefaced with a mushroom cloud.

An unlikely scenario, perhaps. But this stand-off between Iran and Saudi has been full of unlikely scenarios. It is only two years ago that the Iranians attempted to assassinate the Saudi ambassador in Washington. The plan was thwarted only because the two suspects — an Iranian-American and an officer from Iran’s Quds Force — unwittingly connected with an informant from US Drug Enforcement Administration. Of course Iranian officials denied the assassination plot, but America’s attorney general, Eric Holder, announced at a press conference in Washington that the plot had been ‘directed and approved by elements of the Iranian government and, specifically, senior members of the Quds force which is an integral part of the Iranian government.’

The war between Saudi and Iran has already reached America’s shores. It has been devastatingly fought out across Syria’s wasted land. In fact the only place where it has yet to strike meaningfully is on the soil of the main protagonists. If what has been happening so far looks bloody, it is the work of an Armageddon-ist to consider what will happen when those gloves come off. In a region replete with bitter rivalries and irreconcilable ambitions, that will be perhaps the ultimate clarification.

Douglas Murray discusses this with Lt Col Thomas Tugendhat, who fought in Fallujah, in ‘View from 22’: spectator.co.uk/podcast

This article first appeared in the print edition of The Spectator magazine, dated 25 January 2014

The Roots of Turkish Conduct: Understanding the Evolution of Turkish Policy in the Middle East