Turkey’s Feud With Gulenists Could Upset Its Africa Policy 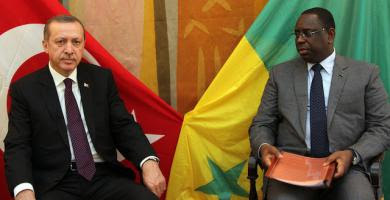 Attempts by the Turkish government to curtail organizations and schools abroad linked to the Fethullah Gulen movement could undermine Ankara’s diplomatic relations with African countries. Gulen’s global religious network, known as Hizmet, calls for an interpretation of Islam that blends traditional values with modernity. Unlike Azerbaijan and the Kurdistan Regional Government in Iraq, where Turkey maintains deeper strategic interests, African countries with weaker ties to Ankara will be more reluctant to give up the developmental assistance they have received from Hizmet.

Turkey’s efforts to broaden its presence in Africa through trade and investment moved forward April 11, when Senegal established a business council with the republic. On April 9, Kenya opened an embassy in Ankara and signed several agreements on trade and security cooperation. However, the growing conflict between the Hizmet movement and Turkish Prime Minister Recep Tayyip Erdogan’s Justice and Development Party has the potential to damage or even reverse potential gains in Africa. This developing rift prompted Erdogan to order Turkish schools run by Gulenists overseas to be shut down. Problematically, Hizmet nongovernmental organizations and schools have over time become the main conduit for Turkish “soft power,” enabling Ankara to establish and maintain relations with African states. 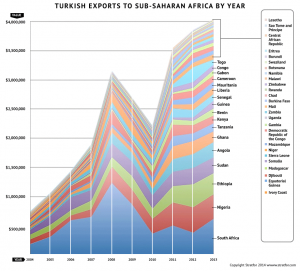 Turkish schools run by Gulenists in Africa often provide a higher standard of education than local schools and are seen by African leaders as a good method of educating the future elite. The global Hizmet school system is also an important source of revenue for the Gulen movement, which is one of the reasons Erdogan’s Justice and Development Party perceives it as a threat.

Erdogan’s Rift With the Hizmet Movement

Erdogan initially benefited from an alliance with the Gulenists during his moves to defang the Turkish military establishment and garner support in the West. However, the Justice and Development Party has since distanced itself from Hizmet, leading the Gulenists to eventually break with Erdogan’s faction. Having consolidated control over Turkey, confirmed by a recent electoral victory, Erdogan now faces the challenge of trying to purge Hizmet’s influence.

After passing a bill to close preparatory schools in Turkey, many of which belong to Hizmet organizations, Erdogan tasked Turkish Foreign Minister Ahmet Davutoglu with curtailing Hizmet activity abroad. A Turkish school established by Hizmet in Gambia in 2010 has already been shut down at Davutoglu’s request. According to Gulenist media, the request was backed by an offer of $500 million for the Gambian state. Davutoglu has pressured Azerbaijan, Kurdistan and Pakistan to shut down Hizmet schools as well. The degree to which they acquiesce will be telling; Azerbaijan has already fired a top official over ties to the Gulenist movement. Azerbaijan needs to balance against Russia and Iran in the Caucasus, while the Kurdistan Regional Government desperately needs Turkish backing to stand up to Baghdad.

South Africa has allegedly been pressured to close its Hizmet schools. However, South African President Jacob Zuma recently pledged his continued support to the Star College group, which runs Hizmet schools that cater to approximately 3,000 South African students. The schools have been in the country for 15 years.

The Benefits of Hizmet Activity in Africa

The “soft power” of the Gulenist presence in Africa was instrumental to supporting Turkey’s Africa policy. In places such as Somalia, Hizmet nongovernmental organizations and schools still make up the majority of the Turkish presence. Hizmet organizations like the Turkish Confederation of Businessmen and Industrialists have also directly facilitated Turkish investment in Africa by organizing trade fairs across the continent. Such groups orchestrate the transport of Turkish businessmen to Africa and arrange introductions for entrepreneurs, policy makers and other nongovernmental organizations.

For many African states, the benefits gained through the Turkish schools, which ultimately facilitate access to prestigious Western universities, and the Gulenist humanitarian aid heavily outweigh the importance of direct relations with the Turkish government, as was demonstrated by Zuma’s recent pledge. Because of its level of development in comparison to some of its neighbors, South Africa is less impressed by Turkish promises of investment than it is by the benefits of advanced education.

Erdogan’s attempts to shut down Hizmet activity abroad, especially the revenue-generating elements, may not necessarily stop Turkey’s expanding involvement in Africa. However, it will definitely make it harder for the Turkish government to retain the goodwill created by the Gulenists and may even risk breaking existing ties if local governments are pressured to take action against Hizmet activities. If this occurs, Turkey may face setbacks in its access to Africa’s natural resources, which make up the largest share of Turkey’s imports from the continent. More important, a breakdown in diplomatic relations could affect access to African markets for Turkish exports and to low-cost labor that benefits the Turkish manufacturing sector.