Slammed by top U.S. government officials and facing espionage charges in the United States, former National Security Agency contractor Edward Snowden described how he sees himself during an interview with NBC “Nightly News” broadcast Wednesday. And he defended his decision to leak documents about classified U.S. government surveillance programs.

We’ve heard from Snowden a few times before, but the NBC interview with anchor Brian Williams inside a Moscow hotel was his first on an American television network. 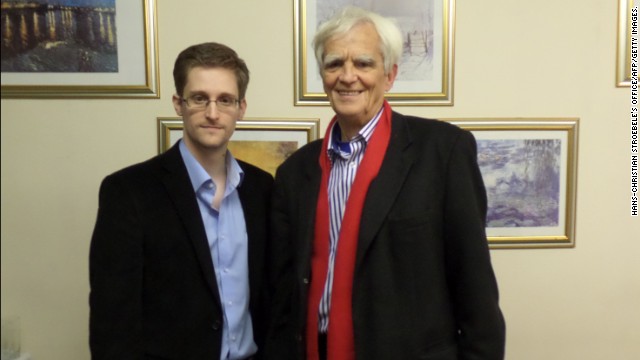 Here are 10 key points from the interview with the 30-year-old former NSA contractor:

That assessment drew a sharp response from U.S. Secretary of State John Kerry, who spoke with NBC earlier Wednesday.

2. Snowden says he was trained as a spy.

U.S. President Barack Obama famously referred to Snowden as a hacker last year, and other officials have described him as a low-ranking analyst. That’s misleading, Snowden said.

“I was trained as a spy in sort of the traditional sense of the word — in that I lived and worked undercover, overseas, pretending to work in a job that I’m not — and even being assigned a name that was not mine,” Snowden said.

“Now, the government might deny these things. They might frame it in certain ways, and say, oh, well, you know, he’s a low-level analyst. But what they’re trying to do is they’re trying to use one position that I’ve had in a career, here or there, to distract from the totality of my experience.”

3. Russia isn’t where he expected to end up, but he’s managing.

“I personally am surprised that I ended up here,” Snowden said. “The reality is I never intended to end up in Russia. I had a flight booked to Cuba onwards to Latin America, and I was stopped because the United States government decided to revoke my passport and trap me in the Moscow airport.”

There’s a culture gap, and it’s been an adjustment.

“But even though I didn’t choose to be here, even though circumstances really trapped me here, I can adapt. I can live life as an American more or less. That’s the beauty of the Internet is that we’re no longer tied to our communities by physical connections,” he said.

4. Like a lot of us, he’s been spending his free time watching old episodes of “The Wire.”

“I’m really enjoying it,” he said, though he added that the second season is “not so great.”

5. He’s not happy about some things the Russian government is doing.

Snowden says he has no ties with the Russian government, and he isn’t happy with some of its policies.

“It’s really frustrating for someone who’s working so hard to expand the domain of our rights and our privacy to end up stuck in a place where those rights are being challenged in ways that I would consider deeply unfair,” he said.

There’s no good reason, for example, for a recent law requiring bloggers to register in Russia, he said.

“I can’t think of any basis for a law like that, not just in Russia, but any country,” he said. “The government shouldn’t regulate the operations of a free press.”

So why doesn’t he do something about it. “There’s so much that needs to be defended here in Russia, but I’m limited by my inability to speak Russian, and so on. It’s an isolating and frustrating thing.”

6. It only takes a cell phone for spy agencies in the United States and other countries to find out a lot about you if they want to.

And that’s even if you’re just Googling something simple, Snowden said, like a sports score (Williams told Snowden he’d recently searched for the score of a New York Rangers game).

They can turn on a phone remotely if it’s off, he said. And even a detail like a Google search for a sports score can reveal a lot about you.

“You probably speak English. You are probably an American. You are interested in this sport. They might know what your habits are,” Snowden said. ‘Where were you in the world when you checked the score? Do you check it when you travel? Do you check it when you’re at home? They could tell your pattern of life. Where are you doing these activities? When do you wake up? When do you go to sleep? What other phones are around you? Are you with someone who’s not your wife? Are you someplace that you shouldn’t be?”

7. He wants to return to the United States someday.

“If I could go anywhere in the world, that place would be home,” he said.

But he responded with a series of questions rather than specifics when asked what he missed about home.

8. So why doesn’t he come back to the United States to face charges? Snowden says that’s a fair question, but an ignorant one.

Because he was charged under the Espionage Act, Snowden says he has no chance to make a public defense of his case.

“You are not allowed to argue based on all the evidence in your favor because that evidence may be classified,” he said.

“When people say, ‘Why don’t you face the music?’ I say, ‘You have to understand the music is not an open court and a fair trial.'”

9. Why did Snowden leak classified documents? He says he had no choice.

“The reality is, the situation determined that this needed to be told to the public. The Constitution of the United States had been violated on a massive scale,” Snowden told Williams. “Now, had that not happened, had the government not gone too far and overreached, we wouldn’t be in a situation where whistleblowers were necessary.”

The U.S. government, Snowden said, is using the threat of terrorism “to justify programs that have never been shown to keep us safe but cost us liberties and freedoms that we don’t need to give up and our Constitution says we shouldn’t give up.”

10. He says he tried to go through official channels before leaking information but met dead ends.

Among the people he contacted, Snowden said, was the NSA’s general counsel office.

“I reported that there were real problems with the way the NSA was interpreting its legal authorities,” Snowden said. “And the response, more or less, in bureaucratic language was, ‘you should stop asking questions.'”

On Thursday, the NSA released what it said was a copy of an e-mail exchange between Snowden and its general counsel office. Snowden’s e-mail asked for clarification of training course material and “did not raise allegations or concerns about wrongdoing or abuse,” according to the Office of the Director of National Intelligence.