Israel in the Changing Strategic Environment in the Middle East

Israel in the Changing Strategic Environment in the Middle East 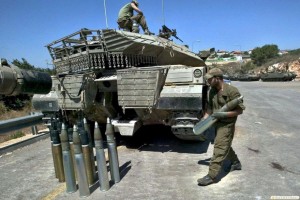 A cursory look at the geo-political developments taking place in the Middle East would draw our attention to one very critical aspect of Middle Eastern politics: Israel’s transforming strategic environment and its geo-political posture therein. It would not be wrong to say that one of the greatest beneficiaries of the US’ geo-political maneuverings in the Middle East during last two decades or so has been the state of Israel. In fact, Israel’s strategic position vis-à-vis other regional powers has fundamentally changed over the last two decades or so, making it one of the most ‘formidable forces’ in the region. However, the credit for this “change” does not merely go to Israel’s own defence related preparations, but also to the declining power of its strategic competitors, thanks to the recurrent US direct and indirect interventions!

For instance, the conventional military threats to Israel has been significantly reduced. The phased destruction of the Iraqi army, first in the 1991 Gulf War and then during the 2003 Iraq War, has eliminated Iraq as a significant conventional threat. It is easy to forget that until this process began, Iraq possessed a very large conventional order of battle and contributed expeditionary forces to the Arab war coalitions attacking Israel in 1948, 1967 and 1973. Until 1991 Israeli defense planners needed to constantly update their estimates of the size of the potential Iraqi expeditionary force could be sent to join an “Eastern Front” attack on Israel and of the speed with which these forces might traverse Syrian territory and the Jordanian desert to reach the front lines. In June 2014, by contrast, the ease and speed with which a few thousand-strong insurgents of the Islamic State in Iraq and Syria (ISIS) caused the newly reconstructed units of the Iraqi military to melt in the face of an attack illustrates how difficult it would be for Iraq to once again constitute a threat to Israel’s security.

Similarly, for the past two years, a very different development in Syria has seriously diminished if not eliminated that country’s capacity to pose a significant conventional military threat. The ongoing civil war has weakened Syria’s armed forces and has rendered many of its fighting units inoperable. Indeed, among Israel’s close neighbors, only Egypt and, to a lesser extent, Jordan still possess significant conventional military forces. But Egypt has adhered to its peace treaty with Israel for the past 35 years, and Jordan has shown similar commitment for the past two decades.

With these states left with no real ground capacity to attack Israel, and with the peace treaties with Egypt and Jordan intact, there only remains a large rocket arsenals of non-state actors, primarily Hezbollah and Hamas, the only remaining conventional threat to Israel. Although Iran can be a ‘threat’ to Israel, the former does not have the capacity to launch any major direct attack on Israel. Although Iran does possess significant conventional military forces, it cannot project them over such great distances. Nor would the region’s emerging geopolitical realities allow such projection, as Iran is unlikely to risk a major deployment through the already much troubled territories of Iraq and Syria.

Apart from enjoying a considerable degree of security against conventional threats, the state of Israel has acquired reasonable security against unconventional threats too. Beginning with Israel’s destruction of the Osirak reactor in Iraq in June 1981, and continuing with the destruction of Iraq’s chemical weapons arsenal in the immediate aftermath of the 1991 Gulf War, and the monitoring and verification regime applied thereafter, Iraq’s ability to project an unconventional threat to Israel was dramatically diminished well before the 2003 invasion. In December 2003, this trajectory continued when Libya’s strong man, Moammar Gadhafi, agreed to dismantle his country’s unconventional arsenal in the framework of a grand bargain with the U.S. Finally, the destruction in November 2007 of Syria’s plutonium-producing nuclear reactor, along with President Bashar Assad’s agreement in 2013 to dismantle the country’s chemical weapons arsenal, has eliminated another significant threat for Israel. In the recent context, the greatest benefit the State of Israel has come to enjoy is that the very alliance structure has changed in the Middle East. For instance, Saudi Arabia, as also its other allies in the region, no longer consider Israel as an enemy. Instead, a covert alliance has not only come into existence but also is fully operational. The alliance structure of the Middle East has, as such, shifted largely in Israel’s favor.

In the 1950s, 1960s and most of the 1970s, when facing the hostility of the neighboring Sunni Arab states, Israel developed alliances with two types of actors: states located in the periphery of the Arab-Israeli conflict, notably Turkey, Iran and Ethiopia; and some of the region’s minorities who were struggling against Israel’s Sunni Arab neighbors. The latter included the Maronites of Lebanon, the Kurds of northern Iraq and the Christians in what is now South Sudan. By contrast, in the Middle East’s newly transformed strategic environment, Israel is enjoying closer relations with states that in earlier decades comprised the core of its hostile neighbors: Egypt, Jordan and Saudi Arabia. With Egypt, Israel shares a common interest in battling jihadi cells in the Sinai Peninsula as well as containing Hamas in Gaza, which Egypt’s current leaders regard as an arm of the existential threat posed by the Muslim Brotherhood.

With Jordan, Israel regards the preservation of the Hashemite regime as a vital national interest. Thus, it regards the defense of the State against possible spillover from the civil wars currently raging in Syria and Iraq as essential. And with Saudi Arabia, Israel shares a strategic interest in containing Iran, with Israel placing greater emphasis on preventing Iran from obtaining nuclear weapons and with Saudi Arabia placing greater emphasis on depriving Iran of its growing regional reach. While these alliances have been brewing for some time, until recently they were kept very quiet and confined largely to intelligence-sharing. More recently, however, leaders of both Egypt and Saudi Arabia have been less reluctant to publicly acknowledge their evolving relationships with Israel.

Notwithstanding this radically changed strategic environment and the radically restructured alliances in the Middle East, Iran remains, perhaps, the most serious challenge to Israel. Israeli leaders and the top echelons of the defence community continue to debate whether the threat posed by Iran’s nuclear efforts is so acute as to be considered “existential.” A major facet of this debate concerns the ability to deter Iran in the event it would acquire nuclear weapons. However, there is a broad consensus in Israel that if Iran were to obtain the capacity to produce nuclear weapons, the result would be a nuclear proliferation cascade, with Saudi Arabia, Egypt and Turkey soon following suit. And there is an equally broad agreement that in a region as volatile as the Middle East, avoiding accidents and inadvertent escalation would be nearly impossible and that if this were to occur after nuclear weapons proliferated in the region, the consequences might well be catastrophic. In order to avoid such a scenario and to, first and foremost, prevent Iran from obtaining a nuclear capacity, Israel has adopted a multilayered approach: diplomatic efforts to increase international pressure on Iran, primarily through the application of ever-more-biting economic sanctions; covert operations targeting Iranian nuclear scientists and facilities, including the use of cyber-attacks; and continued investment in the development and acquisition of kinetic means for destroying Iran’s nuclear facilities in the event that the first two approaches fail. Such investment was meant to compel the P5+1 group—comprised of the U.S., France, the U.K., Russia, China and Germany—that is negotiating with Iran over its nuclear program to continue pressing Tehran to roll it back. Finally, Israel continued to maintain and develop the means for strategic deterrence in the event that all other approaches fail and Iran obtains a nuclear capacity.

On the other hand, as a part of its overall strategy, the State of Israel is happy with, and in a way is supporting, the “Sunni-Shia” conflict in the region because this conflict largely keeps Israel away from the attention of above mentioned non-state actors. However, it still remains to be seen if and the extent to which the state of Israel would actually go into this conflict in order for keeping the region immersed in a perpetual state of conflict; for, only by doing this can Israel immunizing the “villa in the jungle,” which is the phrase former Israeli Prime Minister Ehud Barak uses to characterize Israel’s position in the Middle East. Keeping “the villa” protected from possible spillover effects of “the jungle” has become a serious challenge given the increased chaos surrounding Israel in the aftermath of the “Arab awakening.” And, Israel is quite successfully exploiting the situation to its own advantage by allying itself with the leading “Sunni” states. However, the fact remains that Israel’s covert alliance with Saudia is as capricious as Israel’s own resolve to keep this alliance intact. However, it is equally likely to be positively affected by the developments taking place at global level, i.e., the possible success of Iran-US nuclear deal, which both Israel and Saudia define as antithetical to their interests.