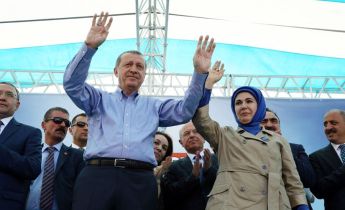 Ever since the Syrian civil war broke out in 2011, Turkish citizens have been living with the bitter consequences of their government’s involvement in the conflict. Along with the US, Turkey’s policy has been to get rid of the Assad regime, but this has not worked. Bashar al-Assad has been strongly defended by his Iranian and Russian backers, and he has cannily given up territory abutting Turkey to Syrian Kurds from the Democratic Union Party, called the PYD. As described by Jonathan Steele in a recent article in these pages, the Syrian Kurds have successfully resisted ISIS in the area on the Turkish border known as Rojava and inspired fellow Kurds on the other side of the border to assert their claims to self-determination.* Kurds are estimated to make up between 15 and 20 percent of Turkey’s population of 78 million, and anti-Kurdish sentiment is running very high.
Turkey has received, housed, and passed on many millions of Syrian refugees at great cost to itself, and its provisions for refugees have been more humane than those of other governments. But many in Turkey see the success of the Kurds in Rojava as a threat.
The policies of Turkey’s Islamist president Recep Tayyip Erdoğan are the cause of many of his country’s failures in Syria. (Having first become prime minister in 2003, he was elected president in August 2014.) Still, when Turks went to the polls to elect a new government on November 1 of this year, they did not turn against Erdoğan’s Justice and Development Party (AKP). Instead their vote suggested that they blamed themselves for having denied the AKP an overall parliamentary majority in an earlier election held on June 7.
That June election established a minority government, led by the AKP, which presided over a period of great violence and instability beginning on July 20 when a Kurdish suicide bomber killed thirty-three people, most of them Kurds, in the border town of Suruç. The violence reached a climax on October 10, when two other bombers (one of them the brother of the Suruç bomber) blew themselves up in the middle of a peace march in Ankara, killing 102 people. In both cases the carnage, generally believed to have been plotted by ISIS, was facilitated by official negligence in providing security. That did not stop the AKP from presenting the blasts as yet more evidence that the party should be given a mandate to rule on its own. On November 1 voters returned theAKP to power with a strong working majority. (Following the ISIS attacks against France on November 13, Erdoğan called for a “consensus of the international community against terrorism.”)

Rarely can an electorate have changed its mind so decisively over such a short period. On June 7 the AKP won 41 percent of the vote, giving it 258 deputies in Ankara’s 550-seat parliament, with the remainder going to three opposition parties that managed to clear the 10 percent threshold necessary for parliamentary representation. They were the center-left Republican People’s Party, or CHP (which won 25 percent of the vote), the far-right Nationalist Action Party, or MHP (16 percent), and the Kurdish Peoples’ Democratic Party, or HDP, which became the first Kurdish nationalist party to clear the threshold, with 13 percent.
Five months later, in the November 1 election, the AKP increased its share of the vote by 8.5 percent, or more than 4.5 million votes, capturing 317 seats. It had notable success in cutting down the MHP vote to only 11.9 percent. The Kurdish nationalistHDP cleared the 10 percent threshold by a mere 0.8 percent; had it failed to do so, most of the party’s fifty-nine seats would have gone to the AKP. As it is, the AKP’s strong comeback has virtually guaranteed that the party will stay in power until 2019. Erdoğan has pulled off the classic politician’s trick of successfully selling the panacea for an ailment largely of his own making.
One lesson of the election seems clear. Given the chance, people who live in a region that has been torn apart by political instability will often prefer continuity to a potentially dangerous leap into the unknown. In the Middle East, the citizens of Iran have never seriously tried to bring down the Islamic Republic, notwithstanding the resentment they feel. In 2011 Saudi citizens did not take part in the Arab Spring, despite confident predictions that they would be “next.” In both countries, the spectacle of neighboring countries in flames reinforced a fear of upheaval. Then there is the economic prosperity that a long period of AKP power has brought to Turkey, creating the new middle class that strongly supports Erdoğan. For these reasons, on November 1, Turkey became a third example of such expedient caution.
Erdoğan’s dominance of Turkish politics is both a consequence and a cause of the weakness of the country’s institutions. As an ambitious prime minister in the 2000s, he cut back the power of the country’s secular military and civilian bureaucracies, which had used strong-arm tactics with many human rights abuses including torture, aimed at preventing Islamists such as Erdoğan from assuming power in the past. This campaign culminated in August 2013 with the jailing of dozens of high army officers, including a former chief of the general staff, for plotting against the government. Senior officers nowadays shy away from making any decision of consequence. As a European diplomat in Turkey put it, “You won’t find four Turkish generals in a room these days, for fear of being accused of plotting.” Every army promotion above the rank of major has to be approved by the president.
Also in 2013 Erdoğan was challenged by a powerful religious movement inspired by Fethullah Gülen, a Turkish preacher living in eastern Pennsylvania who enjoys strong support from Turkey’s judiciary and police. The movement has been called a “moderate blend of Islam”; although its workings are often obscure, its publications emphasize science, technology, and multiparty democracy. Erdoğan had previously been able to intimidate military officers, but judges and prosecutors, some connected with Gülen, have been able to preserve independent power. In December 2013 more than fifty prominent pro-government figures were questioned about corruption by prosecutors, some of them thought to be sympathetic to Gülen. Later the same investigation was said to raise questions about the corrupt behavior of Erdoğan’s son Bilal. Since then Erdoğan has said he is trying to eradicate the “parallel structure” within the bureaucracy that allegedly has ties to Gülen. Thousands of prosecutors and police officers have been sacked or transferred. Several judicial officials have been jailed (including a judge who had awarded bail to arrested followers of Gülen). 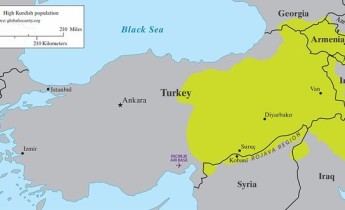 
The PKK’s return to fighting clearly lost Demirtaş votes among both moderate Kurdish nationalists and non-Kurds who could not bring themselves to vote for a party associated with attacks on soldiers and policemen. (Their funerals are shown nightly on the evening news, stoking further anger.) But Karasu and other PKK leaders had long expressed doubts over Demirtaş’s pursuit of non-Kurdish votes and his relations with the Turkish authorities.
After the vicious bombing in Ankara, Demirtaş called off all election rallies and spent much time attending the funerals of the thirty-four party colleagues who were among the dead. HDP offices around the country were attacked by Turkish nationalists, and the pro-government media imposed a de facto ban on news about the party. Demirtaş went briefly to London, reportedly after receiving death threats. All the while, Erdoğan campaigned hard for the AKP, although according to the constitution, he should, as president, be impartial.
On October 20 the AKP prime minister, Ahmet Davutoğlu, told a crowd in the largely Kurdish town of Van that if his party was not elected it would spell the return of the “white Toros”—the Turkish name for the Renault 12, a car associated with the gendarmerie’s fearsome intelligence agents, who carried out thousands of extrajudicial executions of Kurdish nationalists during the 1990s. This was a remarkably overt threat for a head of government to make to his own people, and a sign of the perversion of democratic norms that has become common in Turkey.
In October, Angela Merkel came to Istanbul to ask Erdoğan to ease Europe’s refugee crisis by looking after more Syrians, Turkey having already devoted more shelter and services to refugees than any other country. She held out the promise of aid, the lifting of visa requirements for Turks wishing to enter the EU, and German support for advancing Turkey’s long-standing (and long-dormant) application to join the EU.
Merkel’s visit came at a time when Turkey was subsiding into chaos as a result of a deliberate government strategy, although she made no public mention of this. In Turkey the pro-government media showed pictures of the two leaders on thrones in an Ottoman palace dating from the empire’s late, degenerate phase. All the while, a short distance away, along the shores of the Bosporus, businessmen continued to do a brisk trade in dinghies and outboard motors intended to convey Syrian refugees to Greece, while many would try to reach Germany.
In the aftermath of Erdoğan’s election triumph, with the EU in need of his help and US criticism muted because American warplanes are using Turkey’s Incirlik air base to bomb ISIS, Erdoğan may well feel his moment of vulnerability has passed. On November 4 he urged parliament to change the constitution to provide for an “executive president” with increased powers. This would require thirteen oppositionMPs to vote with the AKP to hold a referendum approving the introduction of a regime conferring greater authority on Erdoğan. Why does he insist on having his dominance of Turkish politics confirmed in a new constitution? When the details of the constitutional changes he proposes are revealed it will not be a surprise if he demands more involvement in appointments to senior judicial positions, which would, if events turn against him, protect him and his family from prosecution.

Also on November 4 Erdoğan promised to continue the fight against the PKK “until all its members surrender or are eliminated…. The period ahead of us is not one of talks and discussions.” His words came amid reports of clashes between the Turkish military and PKK forces that had taken refuge in Iraq. The PKK has long demonstrated its ability to evade defeat on the battlefield. I was told in Diyarbakır that there is a steady stream of recruits to the PKK’s fighting forces. Turkey’s Kurdish politicians who are committed to an electoral process stand to lose most from the resumption of fighting, particularly Demirtaş, whose HDP is barely hanging on to its status as a parliamentary party.
Threats from the Kurds, an economy that is now faltering, and the wider repercussions of events in Syria will soon challenge Erdoğan’s apparent confidence. In the long term,ISIS may be another threat. The jihadis dislike his regime, which is not nearly pious enough for their taste. Although ISIS is believed to have been behind the Suruç and Ankara blasts, so far it has refrained from directly attacking the Turkish state itself, whether its army or its civil administration. But should Turkey and ISIS engage in combat, the movement’s cells within the country may prove too widespread, and too well-entrenched, to be quickly defeated.
Erdoğan’s reading of the electorate has been masterful, but he lacks the magnanimity that is essential for effective leadership. His pugnacity and lack of judgment suggest a paranoid character who is all too willing to behave like the wrathful “sultan” depicted by his critics. The president’s version of democracy is a numbers game, in which the majority wins the right to crush the minority. Turkey seems bound to suffer for it.
—November 18, 2015