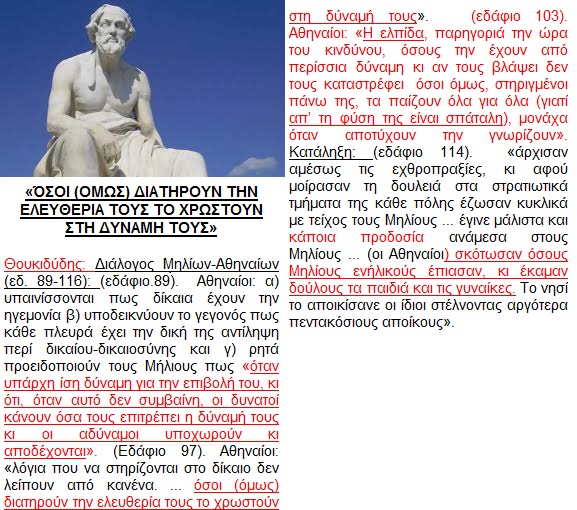 Thucydides surely did not lack ambition. He hoped his massive narrative would be “a possession for all time.” In writing his first and only book, Thucydides claimed

It will be enough for me if these words of mine are judged useful by those who want to understand clearly the events which happened in the past and which (human nature being what it is) will…be repeated in the future.

He might be accused of hubris but not of overreach. Most scholars of history, including our good friends at Zenpunditand The Strategy Bridge, concede Thucydides achieved this hubristic goal. Human nature has not changed and events played out between Athens and Sparta have, if not exactly repeated, have certainly rhymed again and again. The constant interplay of fear, honor, and interest in human conflict has been seen again and again. His History of the Peloponnesian War is a classical text and has rightly earned the Athenian consideration as one of the fathers of history.

Thucydides called war a “savage schoolmaster,” and he offered his carefully crafted history to reduce the blood bill of learning. He quite effectively addresses the role of strategic assessment, the importance of domestic politics in conflict, the complexities of alliances and diplomacy, and the interplay of land and sea warfare. For this reason, Thucydides sits on a pedestal among historians, and his work is considered required reading for serious students of strategy and military history. There is much to learn from him, and it is not surprising that major educational programs, especially the U.S. Naval War College where I once studied, start their strategy programs with a week devoted to this once discredited admiral from Athens.

His insights have proven invaluable to serious students attempting to understand the past and apply it to the present and future. But much of this reputation is based on Thucydides’ purportedly dispassionate style, attention to detail, and perceived objectivity. We often take him at his word that “those who want to understand clearly” the history he recounts. For example, Princeton’s James McPherson has stated that he relies on Thucydides “because he is a more careful, precise, and trustworthy historian who does not try to go beyond the evidence.” Williamson Murray, the strategic historian, appreciates and endorses the Greek author because he was

able to examine with honesty and ruthlessness the reality of war—not glory, not colorful parades, little but desolation and tragedy, yet a fundamental and everlasting part of the  human tableau.

Yet, while we can admire his realism, how ruthlessly honest was Thucydides in his analysis?

As the distinguished Yale classicist Donald Kagan shows in his impressive Thucydides: The Reinvention of History, the ancient Athenian is not simply the detached historian we have come to think he was. After he was exiled for presiding over the embarrassing loss of Amphipolis in 424 BC, Thucydides had much time to ponder the war. However, he was also biased by his close association with critical key participants, including Pericles.  Murray later admitted that our good Greek admiral was capable of “loading the dice” a few times in his perceptions of what occurred.  Murray himself points out the Pericles’ famous speech as recalled by Thucydides “proved more flawed in its long-range analysis of the future.” It is hard to disagree with Mark Gilchrist, who argues that Athenian strategic rationality declined, but we should also recognize it was not perfect to start with.

Like any historian, Thucydides had to create a framework for the war and had to select facts, weigh sources, and arrange a narrative. That narrative is very much a personal history with honor and reputations at stake, and it was crafted without direct access to many of the principals and the kind of archival sources we take for granted now. Contrary to McPherson’s assessment, Thucydides has to be read more critically rather than accepted as trustworthy. He carefully crafted a story that he wanted the audience to accept. As Kagan reveals in his book after a lifetime of study of “the Long War” between the Greeks, our man Thucydides was human after all.  Kagan authored his own highly regarded four-volume history of the fight for hegemony in Ancient Greece. He meticulously culls the available evidence from many other sources in addition to a critical analysis of Thucydides’ own account. Thus, while Thucydides paints Pericles and his grand strategy for the war as completely reasonable, Kagan finds this to be a revisionist interpretation. Blame for the protracted and plague-ridden strife of Athens was laid at the feet of the fickle nature of democratic rule by the Athenian historian. Yet, no mention is made of Pericles’ failure to ensure that the Athenian treasury was robust enough to make his strategy viable or whether a defensive strategy was consistent with Greek culture. One might also ask how the great Pericles’ accounted for chance and risk in his strategic calculation, and whether the notion of a catastrophic plague ever crossed his mind.  One wonders if he thought about that as he lay on his deathbed suffering from it.

Thucydides would have his readers believe that the infamous Sicilian expedition in 415 should not be blamed on the aristocratic Nicias. No mention is made of Nicias’ failures to ensure that his expedition was equipped with the cavalry that would have allowed the Athenian force to take Syracuse or his poor tactical dispositions and weak leadership. Kagan convincingly demonstrates that Thucydides shades his arguments, largely by omission, to craft his own interpretation of events against the contemporary accounts of his time. While praising Thucydides’ research and for and his production of a great gift to the discipline of history, Kagan ultimately concludes: “For all his unprecedented efforts to seek and test the evidence, and for all his originality and wisdom, he was not infallible.” So, students of history and strategy, read critically and beware.  While he was not completely detached or entirely objective, Kagan still agrees that the study of Thucydides is worthy of a high place in educational programs. If only because he “looks deeply into the causes of war, drawing a distinction between those openly alleged and those more fundamental but less obvious.”

Anyone who wants to understand Thucydides in  breadth, depth, and context, as Sir Michael Howard urges, should read the Athenian admiral first. The classics are always the best place to start. But, you should also examine Kagan’s discerning deconstruction and Williamson Murray’s excellent essay at the Naval War College Review so that you can unpack one historian’s assessment of what really occurred. The combination of Thucydides with Kagan and Murray are ideal for anyone wanting to understand why the past is so often repeated in the future.

Dr. F. G. Hoffman is a retired Marine who works at the Institute for National Strategic Studies at National Defense University.  His Ph.D. in War Studies was awarded in 2015 from King’s College, London.

Πηγή War on the Rocks