As the helicopter roars its way west from the Tel Aviv coast, two dots emerge from the featureless blue. Closer up, they begin to take shape: Giant platforms for extracting gas from under the Mediterranean Sea.

“A few years ago, there was nothing to see around here,” Yossi Abu yells from the front seats. And soon, according to the Delek Drilling LP CEO, there’ll be more. He points northwards. “Over there, we’ll build a new platform,” he says. “To export gas to Egypt and Turkey.”

Abu makes it sound easy. It won’t be. Hundreds of miles of undersea pipelines will cost billions of dollars and pose a technical challenge for their designers. And even that task is dwarfed by the political engineering required to build stable energy routes through a conflict-ridden region.

That’s true across the Eastern Mediterranean, where nations have watched enviously over the decades as energy finds a bit further east made their Gulf peers rich. Now it’s got riches of its own, as it becomes clear that Delek’s discoveries were just a start. The whole area from Cyprus to Lebanon and Egypt may be sitting on even bigger gas fields. The United States Geological Survey estimates they could hold more than 340 trillion cubic feet, an amount that would surpass U.S. proven reserves, though many in the industry think the actual volume may be lower.

There’s an ideal market nearby in Europe — rich, mostly lacking its own fuels, and desperate to wean itself off energy dependence on Russia. It’s just that getting the gas there will require collaboration between countries with a history of feuding or fighting.

“This is the kind of opportunity where either everybody rises or everybody falls,” said Amos Hochstein, who served as former U.S. Secretary of State John Kerry’s energy envoy. Hochstein acknowledges the “complicated relationships” involved, but says they can be overcome. “We’ve been preaching this gospel in the wilderness for a while,” he said. “But enough people now see the potential fruits.”

Read more: Why gas is driving the reunification of Cyprus – a QuickTake

They do in Egypt, where the Zohr field discovered by Eni SpA is the region’s largest to date, and a tipping-point that persuaded other majors to take the East Med seriously. BP Plc, which has a 50-year history of exploring and producing gas in Egypt, bought a 10 percent stake from Eni in November.

For Egypt’s economy, hamstrung since the 2011 revolution by a lack of foreign currency, gas could prove a savior. The country used to be an exporter, but had to sacrifice those sales to meet domestic shortages. Thanks to Zohr, it’s aiming to reduce imports next year and start exporting again in 2019.

Then there’s Turkish President Recep Tayyip Erdogan and Israeli premier Benjamin Netanyahu, who spent years at loggerheads before reaching a reconciliation in 2016 that was partly driven by potential energy ties. Turkey gets gas from Russia and Iran, but has had a volatile relationship with both neighbors lately. And being on the receiving end of eastern Mediterranean pipelines would help Erdogan promote his country as a hub for the region.

Erdogan appointed his son-in-law Berat Albayrak as energy minister, and a senior Israeli official said he speaks to Albayrak daily on WhatsApp. Former U.S. diplomat Matthew Bryza is now a director of the Turkish company Turcas Petrol AS, which has held talks on buying Israeli gas. Bryza says that discoveries in the Mediterranean could also help end a much longer-running dispute: the division of Cyprus.

Since 1974, northern Cyprus has been controlled by a self-declared state supported by Turkey. Several attempts to reunify the island have failed, but this year’s talks in Switzerland have rekindled hope, and gas could be one reason.

Eni, Exxon Mobil Corp. and Total SA are among companies keen to explore off Cyprus, which will be much easier if the political obstacle is removed. Turkey insists that the Greek-Cypriot government has no right to dispose of energy resources on its own. It even sent warships toward the island to make the point.

While there are bigger issues to resolve, “if there’s a deal on the horizon, then I think the potential for energy benefits could well pull the sides over the end-line,” Bryza said.

Many analysts see an Israel-Turkey pipeline via Cyprus as the best way to transmit gas to Europe. It could also be piped to LNG plants in Egypt and shipped from there. Israeli and European Union officials have even held talks on an ambitious pipeline route all the way to Greece.

Who’ll do the building? There are plenty of big companies betting on the East Med, but they haven’t all had an easy ride there so far.

Eni and Exxon are among companies that registered interest in exploring off Lebanon; the auction of rights has been delayed since 2013, a victim of the country’s political gridlock and territorial disputes with Israel, though the government is promising a fresh attempt this month. In Egypt, Royal Dutch Shell Plc’s liquefaction plant has been idle for years. Noble Energy Ltd., the only major foreign company to try its hand in Israel, has made money off domestic sales, but its export projects got tangled in a legal and regulatory web for years.

The region’s geology, especially the massive trench along the seabed from Israel to Turkey, will make pipeline construction tough, according to Simon Henderson, director of the Gulf and Energy Policy Program at the Washington Institute. And there are price concerns: the global supply glut weighs on the industry’s appetite for expensive projects.

Lately, though, optimism is building. Enthused by Zohr, Eni sees Egypt as the center of a hub including Israel, Cyprus and Libya that can provide “solutions for European energy security,” according to Chief Executive Claudio Descalzi.

To get companies and regional governments on that track might need a nudge from major powers — which means the EU and U.S.

“You definitely need both political and commercial will to coalesce,” said Brenda Shaffer, a senior fellow at the Washington-based Atlantic Council research institute’s Global Energy Center. She said the EU already sees Mediterranean gas as a “top-priority project,” though it lacks financial tools to push it forward. 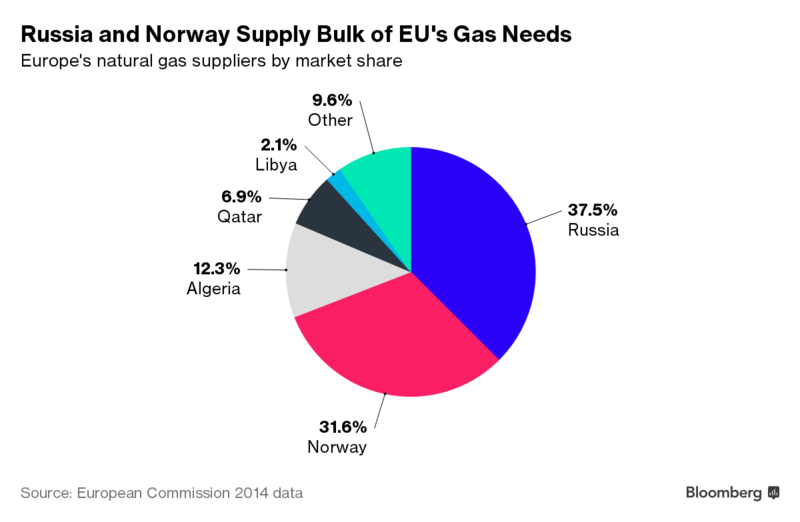 Bryza sees the potential to replicate, in the East Mediterranean, the success of a project he saw up close as U.S. ambassador to Azerbaijan. BP’s Baku-Ceyhan oil pipeline runs from the Azeri capital via Georgia to Turkey’s Mediterranean coast. It received aggressive American support. And the result has been “new patterns of cooperation” between the three countries, Bryza said.

The U.S. has been pushing for the reunification of Cyprus and the reconciliation of Israel and Turkey, which Hochstein helped to broker. Its interest level under President Donald Trump remains to be seen.

When the U.S. has backed energy routes in the region, it’s often been trying to sideline Russia. Trump says he’ll improve ties with Moscow, and in general pay less attention to the outside world when American interests aren’t directly at stake.

Still, Secretary of State Rex Tillerson, a former Exxon Mobil CEO, is no stranger to pipeline politics. “Control of energy will be a priority, even in his subconscious,” Shaffer said.