[youtube https://www.youtube.com/watch?v=ncGUfZDBv-Y&w=854&h=480]
North Korea’s failed missile test this weekend is just the latest in a string of tests by the country that has stoked fears around the world.
There had been growing concern all week that Kim Jong Un’s government would attempt some form of missile or nuclear test this weekend as it celebrated the 105th birthday of its late founder, Kim Il Sung. So while the missile test did not come as a grand surprise, it serves a reminder of the growing threat that North Korea poses to U.S. interests in East Asia and the possible threat that it could pose to the U.S. homeland in the not-too-distant future.
North Korea’s attempted missile launch fails, US officials say
North Korea vows further missile tests: Report
Here’s what you need to know:
Ballistic abilities
At the moment, North Korea doesn’t have the ability to hit the U.S. mainland with its missiles. However, according to data provided by Michael Elleman, a senior fellow for missile defense at the International Institute for Strategic Studies, a British research institute, North Korea is developing a missile known as the Musudan (or Hwasong-10), with a range of up to 3,200 kilometers (nearly 2,000 miles).
That puts the Musudan within striking range of Guam, a U.S. island territory in the western Pacific that is home to more than 150,000 U.S. citizens, as well as a number of U.S. military bases.
PHOTO: South Korean people watch a televised news broadcast at Seoul Station, in Seoul, South Korea, April 5, 2017. Jeon Heon-Kyun/EPA
South Korean people watch a televised news broadcast at Seoul Station, in Seoul, South Korea, April 5, 2017. more + 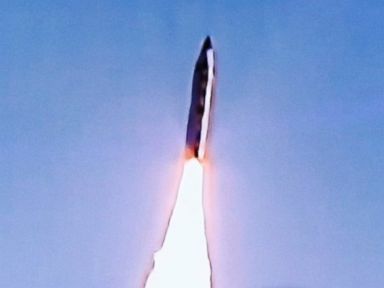 In addition, North Korea is developing other missiles with even greater ranges. Among those are the KN-08 (or Hwasong-13) and KN-14 (or Hwasong-14), both of which are believed to be intercontinental ballistic missiles. According to the Center for Strategic and International Studies, an American think tank based in Washington, D.C., the missiles have maximum ranges of 11,500 kilometers (approximately 7,145 miles) and 10,000 kilometers (approximately 6,215 miles) respectively — within striking distance of the U.S. mainland.
For a missile to be considered an ICBM, it must be able to travel a minimum of 3,400 miles (about 5,500 kilometers).
But experts have cast doubt on how ready the country is to launch such missiles.
“ICBMs that are reliable are at least four years away and more likely five to seven,” Elleman told ABC News.
Robert Kelly, an associate professor of political science at Pusan University in South Korea, pointed out that while Hawaii and Guam are closer targets that might not require an ICBM for targeting, he is “very doubtful North Korea missile guidance systems are good enough to get a … missile to such a precise location,” he wrote in an email to ABC News.
Nuclear ambitions
Missiles are just one piece of the puzzle. North Korea’s nuclear program is also a concern for the international community.
North Korea has conducted five nuclear tests since 2006, two of them last year.
While the nuclear program is separate from the missile tests, “the real issue is whether they could put a nuke on top of that missile. That is just unknown,” said Kelly. “If I had to speculate, I would say yes, that they could nuke Japan but, no, they could not reach Hawaii or [the U.S. mainland] yet.”
“Nuclear experts believe the North to have 12 to 20 bombs and [will] expand its nuclear arsenal to 40 or 50 in the next four to five years,” Sung-Yoon Lee, a professor of Korean studies at Tufts University, told ABC News in an email. “That would rival the size of the United Kingdom’s nuclear arsenal.”
Firepower at this scale would “give North Korea credible second strike capability. That is, the North attacks first, the U.S. shoots back, and the North shoots back — a series of nuclear exchanges, in a mutual destruction,” Lee added.
What is the worst-case scenario?
“The worst-case scenario is open warfare between the two Koreas into which China and the U.S. would get dragged on opposite sides and in which nuclear weapons were used,” said Kelly, adding that he thinks this is unlikely.
But if it does happen, “China has never confirmed what its status would be if war [broke] out again, and we’d like to think China would be on our side, but they’ve so far refused to agree to that position,” said Van Jackson, an associate professor at the College of Security Studies at the Asia-Pacific Center for Security Studies.
But how could the U.S. get dragged into a conflict so far away? “The American alliance arrangement with South Korea and Japan would require American involvement in the case of war, much like America’s Cold War commitment to NATO,” Kelly said. 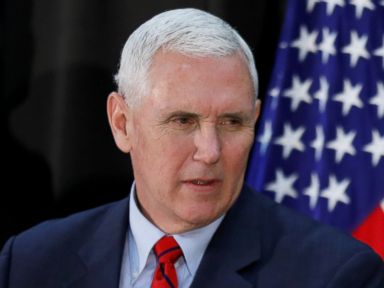 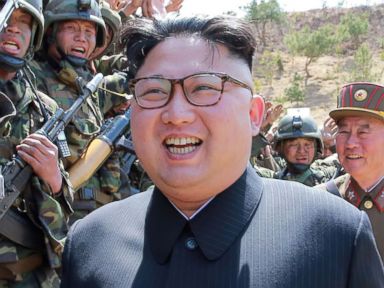 “Such targeted sanctions have worked against Iran, Burma, Ukraine, Congo, etc., because the target is isolated from the international financial order and its partners are presented with the stark choice of either continuing to do business with the primary target or continuing to access the U.S. financial system,” he said. “Amazingly, such target financial sanctions have never been fully employed against North Korea, which is the world’s leading proliferator, money launderer and human rights abuser.”
But according to Kelly, China “has mixed feelings about really cutting North Korea off from the global economy.”
“If North Korea were to dramatically implode, most analysts expect a wave of refugees headed toward China,” South Korea or even Japan, explained Kelly.
Jackson agreed that refugees were a concern, saying, “This is one of China’s long-standing concerns that has incentivized it to urge caution and restraint in Korea.”
The refugee flow could be “on the same scale as Syria but perhaps with even greater desperation,” he added.
‘No joke’
“North Korea is no joke. With its bizarre cult of personality and backwardness, the world tends to laugh at Pyongyang,” said Lee.
“The leadership is not crazy or suicidal, hence an imminent war is unlikely,” Lee continued. “But North Korea is a revisionist state — that is, a state that is willing to take risks to change the international environment in its favor.”
Πηγή: abc News