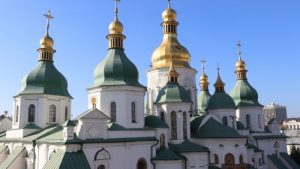 In Ukraine, among the Orthodox Christians there are two opposing sides, one oriented towards the Moscow Patriarchate and Russia, and the other towards the Ecumenical Patriarchate and, more broadly, the West. The Ukrainian government, especially after the military annexation of Crimea by Russia, has decided to safeguard its independence from any Russian influence and to pursue an autonomous path. Implementing this decision includes the “autocephaly” of the Ukrainian Orthodox Church, which means that there will be no ecclesiastical authority of a foreign country intervening in the Ukrainian Orthodox ecclesiastical matters.

The claim of “autocephaly” is not new to the ethos of the Orthodox tradition as it was common whenever an Orthodox nation gained its political independence, to gain also, when the time was right, an independent national church. There are many examples. Greece, Serbia, Bulgaria, Romania and almost all the Orthodox states obtained, sooner or later, after their creation, an independent national church. This is the approach adopted by the Ecumenical Patriarchate in the case of Ukraine.[vi]
Now the question is whether the Russian side, the Patriarchate and the government, is going to continue using religion as a tool in order to preserve or to expand its influence in the region of the former USSR and further. The recent developments, however, show that the Russian side will not opt to de-escalate the crisis, as it links directly the issue of “autocephaly” with the rights of the Russian-minded people in Ukraine. Furthermore, the Russian government considers that the decisions of Patriarch Bartholomew are imposed on him by the West, particularly the United States.
Indeed, the stakes of the Ukrainian ecclesiastical question are very high for the Russian side. This may be understood if viewed under the centuries old policy of the Moscow Patriarchate to emerge as the “Third Rome”,[vii] undermining the Ecumenical Patriarchate of Constantinople. If the Moscow Patriarchate loses its influence in the Ukraine, then this might constitute the end of the Russian dreams[viii] to fully control Orthodoxy.
In this case, not only the Moscow Patriarchate will be unable to become the “Third Rome”, but it will lose an important percentage of the Orthodox flock in Ukraine (according to some estimates to almost 50%),[ix] as well as many religious monuments and historical monasteries. This will certainly harm the influence and prestige of the Moscow Patriarchate and may incite Orthodox churches of other former USSR states, such as Belarus, to follow the example of Ukraine, and seek their own “autocephaly” and independence from any Russian influence. Last, it will be a blow to the Russian doctrine of the “Russian World”. This doctrine, promoted by the Russian state and Church, maintains that ‘Russia, Ukraine and Belarus constitute a distinct community – a Holy Rus (Svyataya Rus), or a Russian world (Russky mir or Rus’kii mir) – that shares a common spiritual destiny”.[x]
An assessment
So far, the Ecumenical Patriarchate seems to be managing the Ukrainian crisis differently than the Moscow Patriarchate. The Ecumenical Patriarch Bartholomew insists that the motivation of his actions is exclusively his Christian interest for the divided and spiritually tormented Ukrainian faithful. He considers his decision to grant autocephaly as an act of ministry (diaconate), he strongly rejects any political motivation behind his decision, and, although he considers this crisis as a “temporary storm”, he opposes firmly and unequivocally the expansive aspirations of the Moscow Patriarchate. In fact, he characterized the acts of the Moscow Patriarchate as of “fake authority”, as acts of those who “pretend to be the First without actually being”.
As for the ROC, developments show that the decision to unilaterally interrupt the “Eucharistic communion” with the Ecumenical Patriarchate has been disadvantageous for itself rather than for Constantinople. The ROC has rushed into this decision without previously consulting the other Orthodox Churches, and so far has managed to gain support only from its traditional allies, the Serbian Orthodox Church and the Patriarchate of Antioch, whose support came as no surprise given Russia’s ties with the Syrian government.
From all of the above one should not lose from sight:

Thus, anyone may easily conclude that:

Yet, the final and crucial question is how high the crisis is going to escalate, and whether the two Churches are going to reach the point of what the press has already called as the “Schism”. This, in our view, depends primarily on Russia, but also on the willingness of its recent ally Turkey – which often undermines the role of the Ecumenical Patriarchate – to assist Russia in implementing its policies against its “mother Church”. Both these actors, and particularly Orthodox Russia, should however consider that only the Patriarchate of Constantinople – the institution and not any man – carries for more than 15 centuries the moral and religious authority of the “Ecumenical”, and this is a title that no political or other decision may eradicate.
Notes
[i]  Cyril Hovorun, “Civil Religion in the Orthodox Milieu.” In Political Theologies in Orthodox Christianity: Common Challenges and Divergent Positions, edited by Kristina Stoeckl, Ingeborg Gabriel, and Aristotle Papanikolaou, London: Continuum, 2017, p. 259.
[ii] In 1990, Filaret was the front-runner to head the ROC, but he was eventually defeated by Patriarch Alexius.
[iii]  President Poroshenko asked the Ecumenical Patriarchate’ s support in resolving the ecclesiastical issue of Ukraine since July 2016: http://www.romfea.gr/epikairotita-xronika/9595-proedros-oukranias-to-oikoumeniko-patriarxeio-na-stirijei-tin-autokefalia, accessed October 27, 2018 (in Greek).
[iv] Constantinople has been under the Ottomans’ rule since 1453.
[v] The word “Unia” (from “unio”) was first used in the 15th and the 16th centuries in order to describe the recognition by some Eastern European Orthodox Churches of the Pope’s primacy and their ecclesiastical adherence to the Roman Catholic Church (instead of Constantinople); the term has a negative connotation for the Orthodox churches as it signals the Vatican’s efforts to dominate over Eastern Orthodox Christianity.
[vi] In the words of Patriarch Bartholomew: “For this reason, as we have given Autocephaly in all the local Churches, our Holy Synod decided to assign the Autocephaly to the very tortured Ukraine, in order to move within the system of the Orthodoxy in unity and inner peace”.
[vii] Constantinople, after the 4th century AD, became the political and religious capital of the empire and was often called the “New Rome”. If the Ecumenical Patriarchate is replaced in the leadership of the Orthodox Churches, then, from a religious perspective, there will be another “new” Rome, the “Third”; obviously, such an outcome will strengthen Moscow’s religious and political prestige. The “Third Rome” as a theological and political ideology was formulated in the early 16th century maintaining that the Russian church and the Russian State are the heirs of the Orthodox legacy and of the Byzantine Empire.
[viii] See for the close connection of the two: Nicolai Petro, “The Russian Orthodox Church,” in Routledge Handbook of Russian Foreign Policy, edited Andrei P. Tsygankov, London: Routledge, 2018, p. 217-232.
[ix] Ain Riistan, ‘’The Moscow Patriarchate and the conflict in Ukraine’’, In Sojateadlane (Estonian Journal of Military Studies), 2/2016, Vol 6: The crisis in Ukraine and information operations of the Russian Federation, Edited by Vladimir Sazonov, Andres Saumets and Holger Molder, p. 211; https://www.ksk.edu.ee/wp-content/uploads/2016/12/sojateadlane_2_www.pdf, accessed November 03, 2018.
[x] Nicolai Petro, “The Russian Orthodox Church,” in Routledge Handbook of Russian Foreign Policy, edited by Andrei P. Tsygankov, London: Routledge, 2018, p. 217-232.
Πηγή: https://www.e-ir.info/2018/11/14/the-ecumenical-patriarchate-and-the-ukrainian-church-crisis/