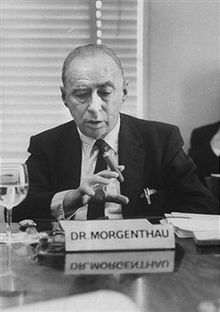 Morgenthau also wrote widely about international politics and U.S. foreign policy for general-circulation publications such as The New Leader, Commentary, Worldview, The New York Review of Books, and The New Republic. He knew and corresponded with many of the leading intellectuals and writers of his era, such as Reinhold Niebuhr, George F. Kennan, Carl Schmitt and Hannah Arendt. At one point in the early Cold War, Morgenthau was a consultant to the U.S. Department of State when Kennan headed its Policy Planning Staff, and a second time during the Kennedy and Johnson administrations until he was dismissed by Johnson when he began to publicly criticize American policy in Vietnam. For most of his career, however, Morgenthau was esteemed as an academic interpreter of U.S. foreign policy.