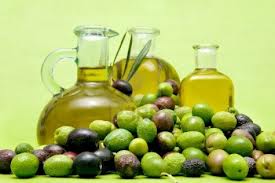 The olive tree was a gift of the gods to the Greeks. Goddess Athena planted the first olive tree on the acropolis at the center of Attica. The grateful Greek inhabitants of Attica honored the goddess by naming their polis Athena (Athens). The affection was mutual. Athena adopted and protected Athens. The citizens of Athens venerated Athena with elaborate Olympic-like games and festivals. They also built and dedicated their greatest temple, the Parthenon, to Athena.

The sacred olive tree flourished throughout Greece and the Mediterranean. Its olives and oil have been nutritional and medical food for millennia.

Greeks ate olives and oil in cooking. They used oil for their lamps, lighting their homes and temples and altars. The Greeks also made perfumes from oil. Some of those perfumes, exported all over the Mediterranean in the delicate and beautiful glass containers known as “aryballoi,” were aphrodisiacs. But olive oil was fundamental for sports and bathing. Athletes rubbed themselves with oil, their bodies becoming like shining statues of gods. Women bathed and anointed their bodies with oil. Greeks in Athens and Olympia also used olive wreaths to crown their victorious athletes.

Laws of the great seventh-century BCE Athenian legislator Solon punished the destroyers of olive trees with death. Solon was convinced the sacred olive and its oil could heal just about everything. The fifth century BCE tragic poet Sophocles praised the “blessed tree that never dies.” The gray-leafed tree, he wrote, nourishes people — and Zeus and Athena guard it with sleepless eyes.

The olive tree remains a blessing in Greece. Its fruit and oil are at the heart of Greek survival, diet, trade, and culture.

When I was a child, we used olive oil to light our home. Our oil lamps did not differ much from those of Homeric Greece.

As a teenager, I used to load two-handled jars full of water on our donkey. I then drove the donkey where my father had planted a few olive trees and I watered them.

Decades later, I inherited those and other mature olive trees, some of them centuries old. But with the death of my father, and with me being in America, my agrarian dreams shattered. A person from my village mismanaged my olive trees pretty badly. He used to give my old mother two gallons of oil per year. The same trees used to give my father more than two hundred gallons of oil per year.

When I visited the village and, with my sister Georgia, walked in my olive groves, I felt the olive trees did not recognize me. Most trees were in a state of neglect. Others were on the verge of destruction. I kept urging Georgia to protect them.

Georgia in Greek means agriculture. So my sister Georgia always promised to fulfill my wishes: protect the olive trees. But, being a city girl, she never did and not because she did not want to. She had her own family and it was not easy to spend time in the village.

My olive trees, like the olive trees of Greece, are witness of Greek history. As Greece was forced to abandon the blessed gods for alien Christianity, goddess Athena was exiled and the Parthenon became a Christian church, a Moslem mosque, and a ruined building. Athena’s olive trees lost their sacredness and immortality. They became simply a source of olives and oil.

In his 1996 book, Olives, Mort Rosenblum wrote, “the [olive] trees [of Delphi] were a telling monument to modern times — a shift from glory to grubbiness — and only they seemed to bridge the time between past and present.”

Indeed, they do. Olives are “symbols of everything Greek since Athena.” Yet Greeks today fail to give olives what they deserve: enough work and care for the shining of the nutritional and healing virtues of this noble fruit. Greek farmers lose lots of wealth by selling most of their oil to Italian merchants.

This is shortsighted not merely because it’s a bad business decision. Greek olive oil is nearly perfect in taste, purity, and dietary and medicinal values. Here’s a product of nature, health, and Greek civilization that under Greek care and, why not, love, could make a difference in Greece — and the world.

Tom Mueller is right about olive oil made by nature. In his 2012 book, Extra Virginity, he says “oil is how life is: fruity, pungent, with a hint of complex bitterness — extra virginity’s elusive triad.”