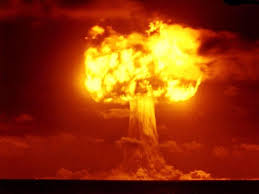 Despite enormous progress in reducing Cold War nuclear arsenals, the world’s combined inventory of nuclear warheads remains at a very high level: approximately 15,350 warheads as of early-2016. Of these, more than 10,000 are in the military stockpiles (the rest are awaiting dismantlement), of which almost 4,200 warheads are deployed with operational forces, of which nearly 1,800 US, Russian, British and French warheads are on high alert, ready for use on short notice.

Approximately 93 percent of all nuclear warheads are owned by Russia and the United States who each have roughly 4,500-4,700 warheads in their military stockpiles; no other nuclear-armed state sees a need for more than a few hundred nuclear weapons for national security:

The United States, Russia and the United Kingdom are reducing their warhead inventories, but the pace of reduction is slowing compared with the past 25 years. France and Israel have relatively stable inventories, while China, Pakistan, India and North Korea are increasing their warhead inventories.
All the nuclear weapon states continue to modernize their remaining nuclear forces and appear committed to retaining nuclear weapons for the indefinite future. For an overview of global modernization programs, see this 2014 article.
The exact number of nuclear weapons in each country’s possession is a closely held national secret. Despite this limitation, however, publicly available information, careful analysis of historical records,  and occasional leaks make it possible to make best estimates about the size and composition of the national nuclear weapon stockpiles:

The information available for each country varies greatly, ranging from the most transparent nuclear weapons state (United States) to the most opaque (North Korea). Accordingly, while the estimate for the United States is based on “real” numbers, the estimates for several of the other nuclear weapon states are highly uncertain.